this is something I’ve been thinking since I’ve tried Jasper and now that both Notion and Craft announced AI text integration, along with a GPT-3 integration for Logseq and soon Obsidian, I was wondering if this is in your plans for the release of 2.0.

Not a developer, but I can most assuredly say it’s not in the cards for the initial 2.0 release.

What is that feature about at all? Never heard!

No, at the moment we don’t have plans for AI integration. I’m personally concerned about privacy implications connected to AI and model sizes but I have not investigated how other apps use models.

I know there are different shades of AI integration (summarise, inspiration, …) with some startups aiming to automatically organise notes. Have someone tested those AI functionalities and found them useful?

Thank god you’re thinking about privacy. For me, the AI offerings out there are mostly useless for two reasons:

That said, I did see Mem.ai’s summaries of some Twitter threads and they were astonishingly good. (I don’t have their subscription but saw results from some other users). Again, limited to English, though.

Absolutely no interest in AI. Thanks for keeping it real bear devs

I trust in natural intelligence. Also no need.

That said, I did see Mem.ai’s summaries of some Twitter threads and they were astonishingly good.

Just wanted to say how much I love that

Well, what a coincidence. 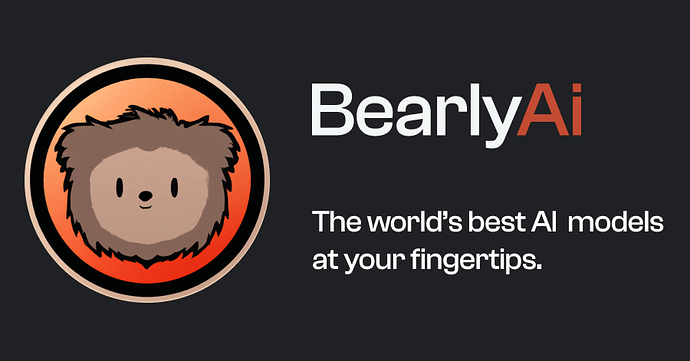 Bearly.ai | The world's best Ai at your fingertips.

Read, write, and learn faster with the world best Ai accessible with a hotkey directly on your desktop. Available for Mac, Windows & Linux.

I have actually used this in Craft, it’s really neat, and it even works in Arabic.

You can tell it to:

It can be a good start…

I really wish bear app integrates this with a / (slash) keyboard shortcut or something.

I see absolutely no reason why i would want this. You know it is well-established that writing your own summaries is a far better way to learn and remember things than copying something, or worse, having something ELSE write a summary for you. I strongly believe that AI integration is antithetical to the bear ethos and the values shared by most users who choose bear

I would also rather discourage this idea. Now it is very hot theme but soon AI capability will be something similar to google search or cloud storage. You will have it available everywhere. The key question then is why should Bear mimic google search or general cloud storage when there are special apps focused on that. I believe 90% of users use Bear for PERSONAL knowledge management of some kind. They do not need to “summarize” their own notes because they themselves created them (they could summarize them in the first place by themselves when having created them etc).

If 90% of Bear use would be e.g. website content / journal article fulltext storage, I can imagine AI could be of benefit. But not in current application use of most users. The maximum function I can view useful would be some kind of clever suggestion of similar notes based on lexical analysis (something Evernote/DevonThink tried to have, but not very effective IMO) but you do not need full-blown AI to do that.

In the end, AI is a tool that can be harnessed well. It can speed up many tasks that rather take time, and not all users have the same use cases.

Craft will integrate AI into the search, allowing natural language questions to be answered based on our notes. That’s something big.

when I introduced this topic it was out of curiosity considering some direct competitors are implementing AI into their apps, and so, it would be interesting to see, if bear was planning to do so, to see and discuss how it could be implemented within the current UI (I see some challenges and approaches that could make it a really interesting design challenge). personally, I don’t find AI integration as being an interesting feature as I can resource it from different platforms and integrate the generated text rather easily. However, I am surprised to read some of the comments, especially those concerned with “personal knowledge management” (whatever that means these days), and the usability of AI. I don’t see a clear correlation between the two to define the latter as good or bad. As any other tool can be used in many different ways and ultimately that’s what will define the outcomes.