What were you doing:
Looking at backlinks tab on info panel

What feature did you use:
Backlinks

What happened:
Extra notes were included in backlinks list

Specifically, for a note with title “2023” I see notes in the backlinks list that appear to match for “.*2023.*”, apparently regardless of whether the matched text is a link or not

These are the so-called „unlinked mentions“ which are quite common in other apps as the user want them. As far as I have remarked in the second-brain-pkm-scene these unlinked backlinks are important part of the workflow

I was about to file the same bug. I have plenty of notes whose titles are a single common word (e.g., “computers” or “statistics”). Within the context of their tags, this is unambiguous. For me, lumping “unlinked mentions” in with explicit links makes the backlinks feature unreliable and much less usable.

Bear is a Markdown-forward editor. There are two(!) very convenient ways for users to create links using Markdown. The editor should honor those, and not make inferences about the unstructured parts of a note.

However, they are a different class of backlinks than « true » backlinks and I would argue for a separation between linked and unlinked mentions.

Agree with this. Direct linked and unlinked should be separated.

They are sort of separated. The unlinked mentions doesn’t have red indication of the link and they are all collected after the linked mentions.

It’s probably just a matter of clarifying the UI a little bit to address the comments in this thread.

The “unlinked mentions” feels a bit much to me as well. I have some notes with one-word titles, and seeing every note with that word in it doesn’t feel very helpful when I’ve intentionally linked just a few notes. Especially knowing that I could do a search for that note title if I truly wanted to find all those results.

I can understand the value in a pkm environment, but would agree a change to the UX would be helpful. My personal preference would be to show the manually linked items prominently, and then tuck the unlinked mentions in another panel, or behind something like a “show additional results” link.

Also (and again personal preference), I’d prefer only the [[title]] style links be considered “back links”. If I go through the effort to use Bear’s URL scheme to reference another note, that’s generally me establishing a link to another page with the explicit intent not to clutter up the list of back links.

I kind of agree with that “unlinked mentions” should be separated from normal wiki links, because sometimes those are unintentional (depending on the way you name your notes).

However, I think the deeper problem here is the global note namespace. Which means all your notes in Bear have to have some unique proper name not regarding the tag they belong to (or you will get clashes). That’s why some people want to have workspaces: simply to separate note namespaces for different type of work they do in Bear.

I’m not sure how to properly combine tags with workflow when you put some of your notes only to a single tag and give them tag-specific names. Because the latter is simply a folder, not a tag. But because Bear’s logic is focused on tag, that tag-specific note is actually global note.

Maybe one simply shouldn’t use short words for note names, but that’s not always convenient…

I think moving unlinked mentions out into its own section will already help greatly with this.

From my understanding, those of us who use a ton of simple note names are also pretty deliberate in our linking. - And those who use complex note names are perhaps less deliberate, - but also less likely to see the “unlinked mentions list” blow up because (by definition?) they have less overlapping note names.

Actually i decided to wait until release of next beta before commenting backlinks, but nevertheless: separating unmentioned links is a good way to go but i wouldn’t place them in their own panel like one user suggested. Just placing them completely under the real backlinks in the same panel is somehow obvious

we would love to avoid separating backlinks and unlinked mentions, as we feel those are a very interesting piece of information. Moving those in a different section/tab would prevent a nice overview of what’s linking/mentioning the note you’re looking at.

We can make those easier to differentiate making the actual backlink bolder and marking the unlinked mentions as a search (which technically is what we do to list those).

Let us know what you think. 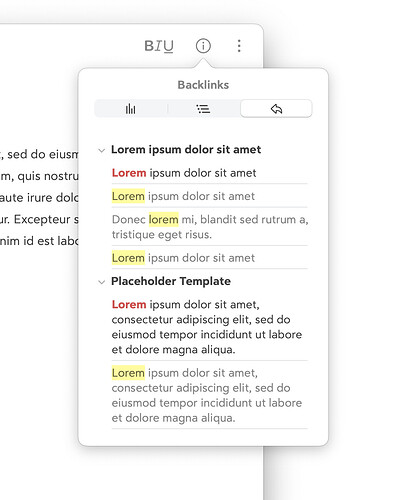 and marking the unlinked mentions as a search

Actually they are easy to recognise and differentiate. The problem is that the long list of unmentioned links can disturb if you are just interested in real backlinks. Therefore I think the yellow marking is not necessary

we can also provide an option for hiding them

That would be useful. As important as unmentioned backlinks are, in some scenarios they ar just not of interest and are disturbing the list of backlinks. An toggle option to hide and unhide them is a good, if not even the best idea

An additional comment to the yellow marking: I dislike that feature also in obsidian - it is just ugly to see that markings permanently while having backlink panel open. It brings unrest into the appearance

a nice overview of what’s linking/mentioning the note you’re looking at.

That’s just it, though. To my mind, these are two very different things. To look for related content (i.e., “mentions”) I use Search. So for me, unlinked mentions in the Backlinks tab will always be clutter; even when it actually is a mention and not a false positive.

Others in this thread feel differently, so an option to hide them sounds like the way to go.

I think that’s spot on - a clear separation and the ability to hide whatever you like should satisfy everyone.

I like the current way it is. But I was also bummed a little, when I first opened the panel, by the amount of notes linked to a note I didn’t linked to intentionally. My personal preference would be showing normal backlinks as usual and have the unlinked backlinks collected at the bottom of the list and ‘folded’ by default, that has a toggle titled ‘unlinked backlinks’ or what may be the name.

Do you mean after each list that belongs to a note or to whole list of real backlinks of all notes? I would prefer latter

The latter I was referring to

A step to reduce the amount of entries in backlink panel, for both linked and unlinked mentions, would be to exclude archived notes from being shown. Anyway i do not expect them to be shown since they are: archived!