(I sent this feedback directly to @matteo; he suggested others might find it interesting if I share it publicly).

Database migration took about eight minutes for my 3,195 notes. At that length, you’ll probably need a progress bar.

The raw count of notes is the same in the post-migration database—that’s a good start. As far as I can tell, everything is as it should be. That’s tough to do… nice work!

It appears that my editor preferences were not migrated, but that may be expected, given your remarks about preferences being missing from this build.

• I’m loving the new type hierarchy and metrics in the editor. I feel the tremendous amount of attention you all have clearly put into this.

• The image resizing affordance is really lovely and fluid.

• The bullet folding functionality is a huge deal for me—I do a lot of outlining—and it appears to work quite well.

• The Markdown-hiding behaviors appear to work gracefully and effectively; I’m grateful to have the syntax hidden in the common case.

⁃ One small usability issue this introduces: it’s no longer evident when a link is internal (i.e. Wiki-style) or external. I use both types extensively and find it disorienting to click and not be able to form an expectation what’s going to happen (will it open a browser? navigate in Bear?).

• The table implementation seems fluid and effective. You’ve nailed a huge number of details. Small things like the behavior of arrow keys are working great.

⁃ One small issue: I often make tables about experiments whose cells are a simple X / √. For these, I’d expect the cells to auto-resize to a more sensible width. Maybe I just missed some way to resize them?!

• While it sacrifices some vertical density, I think it was a great choice to move the time and decorators to a new line in the list: the wide left margin in Bear 1 made for too short a horizontal line length.

• I’m really liking the typographic rhythm in the new note list. But I notice that—to my eye—attachments seem to have just slightly too much margin above them, relative to the other labels. 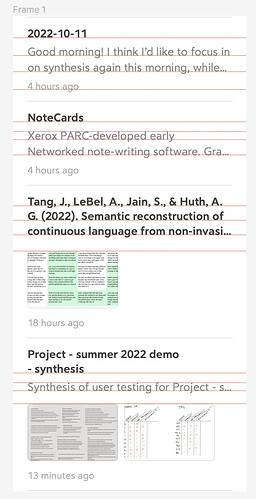 • Search appears to be happening on the main thread. When I press Cmd+Shift+F and rapidly type a string, my characters appear many frames behind my keystrokes.

⁃ Bear 1 has the same behavior, so this is not a regression! Just thought that your revamped search might have addressed this.

• I’m not sure if you’d consider this a bug, but it appears that tag parsing has changed slightly. I have a few notes in Bear 1 which include the string “#1" (intended in an ordinal sense—“number 1”—not in the sense of a tag). In Bear 1, this was not interpreted as a tag; in Bear 2, it is; so now my tag list has a bunch of numbers in it. Maybe that’s the more consistent behavior! Still, it’s a bit obnoxious.

I’m very happy with the new editor. Tables, footnotes, nestable styles, and hidden Markdown were never huge issues for me, but they’re all appreciated. The new experience feels polished and lovely; I’d be happy living in it.

@matteo, since you mentioned that your second goal is to understand missing features, I’ll share a few more persistent hobby horses which create trouble for me day-to-day. I know these things are (rightly) not your priority; just offering in case it’s helpful.

To avoid taking my hands off the keyboard, I really want a command which opens the link under the cursor (and ideally, when Opt is held, it’s opened in a new window). I’ve tried to implement this myself, but I can’t get at quite enough info via Accessibility APIs.

Related, it would be super helpful to open notes from the notes list in a new window without requiring a mouse click. Eg. cmd+shift+f to do some global search, arrow down to desired result, shift+enter or cmd+enter to open that note in its own window.

This can be done by first folding then moving up or down. It is not neat, but somewhat have a hack for it. It is a different story for indent though.

This will be even more important when backlinks get added. I am going to want to look at the backlinks of the currently open note.

The team is, however, thinking about adding a fourth pane instead. In which case I hope it’s not limited to the main window like the other panes.

And great to see your opinions, @andymatuschak You’ve had such a big impact on the PKM world, so having your take on the new beta must be invaluable for the team.

Great insights. Especially the vertical rhythm with attachments. I hope that’s addressed. It’s the one thing that bugs me about Craft docs.

Related, it would be super helpful to open notes from the notes list in a new window without requiring a mouse click. Eg. cmd+shift+f to do some global search, arrow down to desired result, shift+enter or cmd+enter to open that note in its own window.

You can do it now (as well as in Bear 1), just associate menu item “Note → Open in new window” with keyboard shortcut.

I have made a separate feature request concerning this and a couple others hotkeys.

This works perfectly fine, but I would still like a key designated by the team since then it would work on iPad later on too, and would be much easier to navigate between notes when using keyboards.

Eleanor, yes, I agree. It would also make sense to have the same keyboard shortcut for opening note in new window from note list, as well as to open it (when placing cursor on it) from note itself. Irrespective of if your focus is in notelist or note, there would be the same shortcut to open the link/note in new window.