I have just received my bear 2 beta invitation and I played with it a little bit. The new interface is pretty sleek, everything seems to be in the right place and the general feeling is very very good.

All my notes have been imported successfully in a few seconds and I didn’t notice any major problem.

I experienced a crash using the three backticks for the code when I put a language near the backticks (which I already reported directly to Matteo), but except for that everything seems fine for now

Being an IT guy I have played with almost any note apps out there and, as always, Bear feels like the best one in terms of interface and real life usage. If I had to find an area of improvement the only thing I feel is missing is a way to really make a piece of information stand out, like the attached screenshot. The screenshot is from Notion, which I have to use for work but I really dislike.

There might be a way to get a similar effect and I am not aware of that, if so… lemme know

You could (mis)use a code block for that: 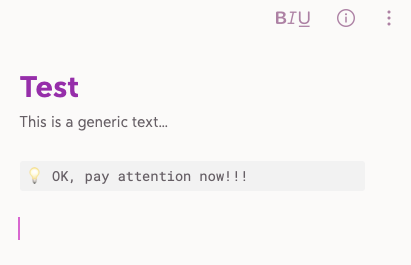 That’s an idea… but the code block doesn’t extend to the full length of the column, plus, you can’t change the color as you pointed out… we are obviously talking about icing on the cake here

I would highly desire so-called foldable callouts or admonitions like in - guess! - obsidian.

I would be satisfied even with unfoldable callouts

It’s a nice touch but to me the obsidian experience is not so great in real life usage.

You can also use table: 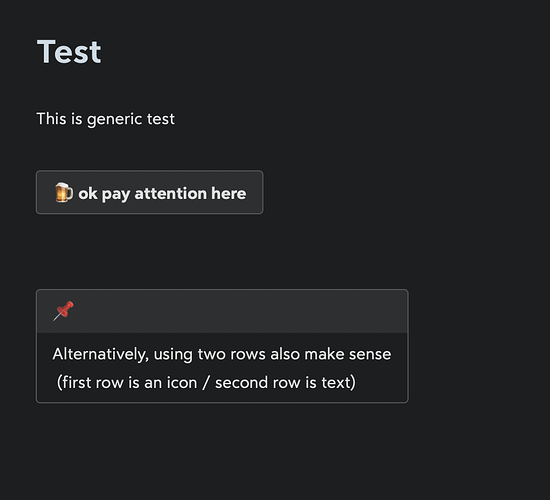 Good idea! Even though not as flexible as a proper callout would be.