This is not a priority for the release of course but something I came to appreciate with some other apps like Upnote. Given the fact that Bear uses a database, any corruption in the database can result in the loss of all our notes.

I would like Bear to do a daily backup of all my notes to an external folder. I don’t really care if it’s a .zip of Markdown files or a .bearbk file or unzipped files in a folder structure – as long as it can happen without me having to do it manually so my notes are preserved in case of a disaster.

That! And version control like in panda already available.

I’m not sure when, but I’d like to explore this. The great question is if we should always back up or apply some algorithms to preserve disc space. One solution might be to do incremental backups (but might not be very user-friendly in disaster situations) another is deleting backups no longer considered useful (e.g. for backups older than 1 month only backups at the beginning and the end of each week are kept). Do you know if other apps have some of those policies in place when comes to automatic backups?

Yeah, preserving disk space is a concern for sure. I’ve seen two solutions in other apps. One is a setting to pick the maximum amount of backups to be kept and the oldest backup gets deleted when the threshold is reached. Another is to just keep one, most recent state. I don’t see it as too much of a concern if you let us pick any target folder. If I can point flat-file backups to iCloud or Dropbox, they will keep change history.

Scrivener has this. Generally speaking, many apps having that feature offer to keep a number of versions or a time limit. There’s also Time Machine which limits its backups with a time limit.

FSNotes has even git intergration. Unfortunately, I haven’t used this application much, so I can’t tell you how it works. But the prospect of using git to fully version my notes is a breathtaking idea.

As far as polices are concerned, there are very few of them. Here’s a screenshot of what’s there. 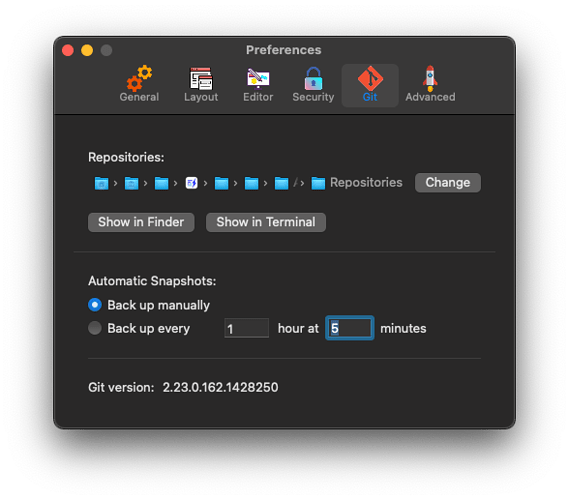 In Ulysses you have three layers of backup:

Ulysses has this as @krssno mentioned above,
and Drafts has automatic periodic backups as well:

Please count my vote for automatic backups, but with choice of .bear, .textbundle/.md * or .bearbk format. Unzipped .textbundle/.md * format would be very useful for viewing on windows/android in other markdown apps.

Either Ulysses’ or Drafts’ retention policy would work well for me.

What goes through my mind is how the restore of an backup could be implemented into the ui. Going into a finder dialogue and to search through hundred of backup files just to find and restore one without having seen a preview is somehow forbidding

Ulysses’ backup restore/panel is probably the best I ever seen in any apps.
You can preview and restore single notes (sheets) or copy text from them.
Or restore whole groups, and current groups or sheets will not be overwriten.

Bear-1 and Bear-2’s complete restore of backup is a bit too scary to use, unless you have a very fresh backup or lost your complete library.