Firstly, loving the new editor, and really grateful to be able to contribute to the beta. While I’m sure to give this a deeper dive over the coming days (as I use Bear a LOT), I just wanted to feed back some initial observations from my first hour or so of usage.

Toggle sidebars: While the cleanup of the B1 toggles is great (much prefer to use the title bar/footer areas for the interaction), I do miss the UI for the toggle sidebars as I used that a LOT when using screen sharing. I know the shortcut keys exist (even though I will never remember them as they are very app-specific) but a UI slot in the title bar would be helpful.

Toggle stats bar: Nice feature, although I only saw it by accident in the View menu. Since we already have a stats panel in the title bar, could an option be added there to show/hide the footer bar? I also just realised that you can click the individual stat blocks to open the stats bar, but a) that doesn’t feel intuitive, and b) feels weirdly wasteful as I would have expected that to show more details on the stat, rather than copy the same info into the footer.

Notes Panel: One of my UI bugbears with B1 was how the notes panel displays its content. Eg if you have labels/attachments added above the first line of text, it would basically obscure the primary content with the references to these (i would argue) items of lesser importance. With the addition of the attachments being shown separately, I would say it further raises the obsolescence of the file name in the one notes panel (as shown below). I would prefer the space-limited notes bar only attempt to display the main text, ignoring content types like image names, labels etc.

Issue, adding B2 after deleting B1: When I initially set up B2, I deleted the original B1 app from /Applications (keeping all support files). However, after then starting B2, no content appeared. To correct this, I uninstalled B2 (and deleted all support files from B1/2), re-added/ran B1 (from a different location) (and synced to get all data), and then added B2 without deleting B1. B2 then shows the notes transferred across from B1. I purposely did not overwrite B1 with B2 in the /Applications folder since Mac permissions prevented me from simply overriding the application file as a direct extract from the zip file.

I can understand some might prefer the UI for switching layout but over the years felt unnecessary compared to how macOS apps approach layout switching.

could an option be added there to show/hide the footer bar?

Not sure this is what you mean but you can hide the stats by clicking on it. 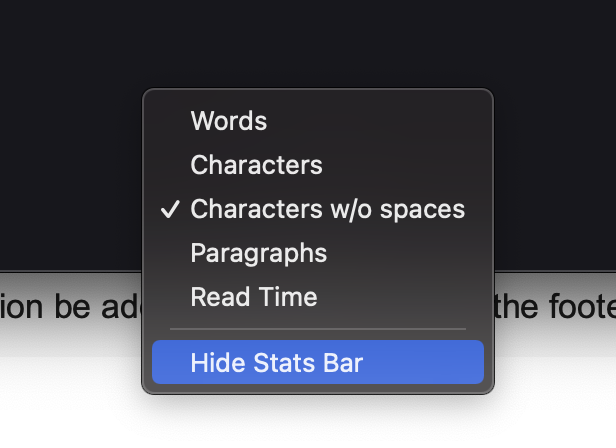 I would have expected that to show more details on the stat, rather than copy the same info into the footer.

I’m afraid we don’t have much more to show about each stat, or you had something in mind?

I don’t agree with you vision for tags because they can be contextual to a #sentence. I do have to think about the files: I can see that, if they are on the first portion of the note they are most likely listed as attachments in the preview, but we also have new view options now for the note list.

Issue, adding B2 after deleting B1

Any chance you have delete the B1 data as well when you delete B1? It will explain the data not appearing in B2.

Mind you can place B2.app in other locations such as your Desktop.