Note title in header for Bear 2.0

Something that is in the Panda alpha and would be helpful in Bear 2.0 is a “sticky” note title.

For longer notes in Bear (1.0 and the current 2.0), once you scroll past the title H1, you lose the note title. Which for those of us who have multiple notes open at the same time is a productivity killer. Constantly needing to scroll back to the top to see, “Which note is this?” or using ctrl-F3, is quite painful. Whereas in the Panda alpha, the note title in the header is perfect.

Since Bear 2.0 now has a large header area that is mostly empty, please consider adding the note title in there.

See image below: Bear 2.0 on left, Panda on right. 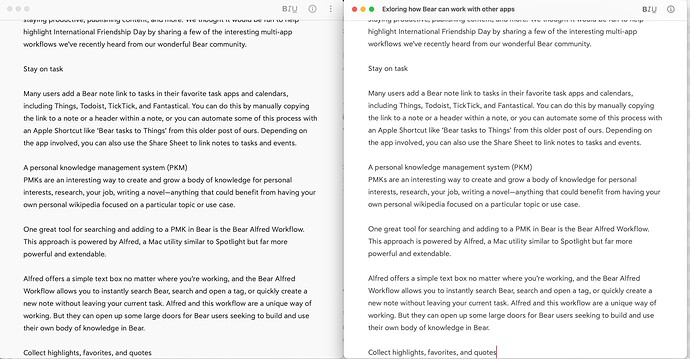 I support your suggestion to use that space as place for the title. I hope you feel ok that i use your thread to express again my antipathy against the usage of a heading as title.

As i mentioned recently my biggest concern with bear is that it is not clear what a title is: is it the H1-header or is it the first line? According to the notes list it is the first line, in turn to the editor and its text formatting it is the H1-header. Generally, but not always that header starts in first line, depending on your settings in preferences how to start a note. Actually there is no clear seperation between heading and title (like in panda) what you can see in the screenshots i posted on reddit. A heading belongs to the body of the text which is called by the title.

So far i made several and very different suggestions:

As i mentioned recently my biggest concern with bear is that it is not clear what a title is: is it the H1-header or is it the first line?

Hello! We think that the current way of retrieving the title is very simple to understand: it’s the first line of your note.

H1 is something else, it has a specific meaning and formatting and you can have multiple inside your note. We don’t want to automatically format the first line as you won’t have control over it (we did what in the first beta of Bear 1 and users hated that

Thank you for your feedback! I agree that the title can be useful, but having it visible all the time alongside the title in the note it’s not ideal.

What we can do it to make it visible only when you scroll a little bit, I’ll have a chat about this with the team.

That would be awesome if the title displayed in the header only once the note was scrolled!!

That’s fine! And as i said that is my favourite solution. But if you write the first as title and it is not a heading the title is displayed in small font although it is the title and is treated as title by bear

H1 is something else, it has a specific meaning and formatting and you can have multiple inside your note. We don’t want to automatically format the first line as you won’t have control over it

It is a matter of one option. Someone wants the note to start with H!, the other one wants a clear not and i just want a real title. You don’t get in each others way.

How a note starts is determined by the settings in preferences. And for this option i am asking on reddit. You must admit that it is an inconsistency that a part of the text is treated as title but is not shown and presented as one in the editor

But what about the users that would love that? As i said, nobody gets in the others way with the way i suggested

Give me one last try. I promise that I will give up then

Bear is a notes app and after implementation of backlinks in combination with its fancy concept of nested tags it also will be a full pkm app.

I use bear in that regard but I use it also as a serious app for long form writing. I am coming from ulysses, left it for several reasons and have found bear. Bear offers me almost everything I like in ulysses and furthermore gives me many things I missed in ulysses.

I like writing longer text. And I like writing them upon thoughts I have written in notes which are connected through tags and crosslinks. I use the pkm features of bear to produce as result long text.

Such text has a huge outline where H1 likely appears several times and addresses different subtopics. These topics are summarised by: the title. Every book, thesis or essay is structured like that.

I have rethought your arguments against automatically formatting the first line as title, and maybe you are right. Actually the most elegant solution would be my request for pandoc metadata block: I start with an empty note and in the first line where an empty note starts, and only there I can use the “%” sign to cause the desired formatting. Bear would anyway treat that line as title. That is totally compliant with MacFarlanes specification for pandoc and probably could become part of commonmarks specification. The effort for the devs would also be relatively minimal here: actually everything remains as it is but the first line is formatted as real title in editor if it starts with “% “

Two requests in regard to: export of table of content and search for notes without title