The Line Width Slider: any chance I’ll see it again?

I was surprised to find 0 results in a search of this forum for any mention of the Line Width slider which used to be in the Editor menu. It was particularly useful during a period of my life (~2016) when I was composing a lot with a Bluetooth keyboard typing to my iPhone in landscape mode. (Perhaps I was the only one? lol)

I know this usecase is unusual but I also know there are at least a few others out there still doing similar things with iPhone.

The custom line width setting is not going away

At the moment Panda doesn’t have any kind of setting, but Bear is going to retain almost everything that it has now.

I’m sorry I didn’t clarify… I was actually talking about the current release version of Bear on iOS. It used to be in the typography menu… Did it move somewhere else?

On iPhone we removed that slider because people were really confused about it as it only worked in landscape (we got tons of emails saying that the slider was broken).

On iPad the slider is still there, but I see that you want to edit in landscape (and yes, you’re probably one of the 3 people doing that

I don’t have an immediate solution or answer for you, I’ll talk to the team and we’ll see if there is something we can do to bring it back.

An answer! Honestly that’s all I was looking for. I would insist y’all not even think about taking the time to put it in just for my sake… except I don’t think it would be just for my sake… because Bear is nothing short of drop dead gorgeous in landscape mode.

(Don’t worry, I hosted these images on my own service.) 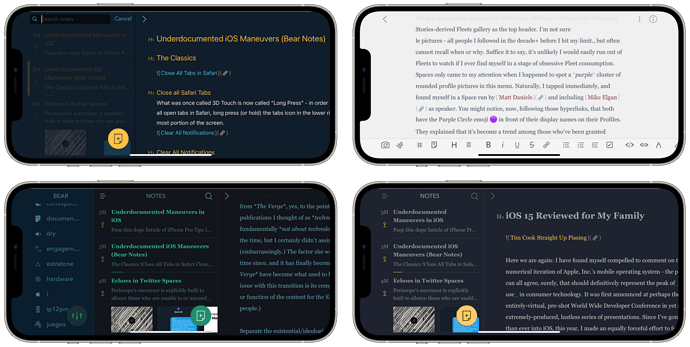 So maybe on a rainy day, as they say, you could do so and include a tip to the tune of rotate the phone just once, why don’t ya?

As always, I appreciate the quick response. I’m sure I will be embedding a screenshot somewhere in the future as an example of what absolutely superb customer support looks like.

Gorgeous you say? Stop it! You’re making us blush.

Regarding the above, sunny day, rainy day, either way, thanks for the suggestion

We really appreciate any and all feedback we receive. We weigh up every comment we see coming in and discuss them within the team.

I had the exact question that @matteo thought you were asking, so I’m glad to have seen this thread, as I was about to ask about width control when Panda’s editor gets incorporated into Bear 2.0.

Hey folks, it’s me again… The Line Width Slider Guy… I’m back with gobs more knowledge about iPhone Keyboarding in general (it’s sorta become my whole life somehow,) and I thought it might be an appropriate time to bring this up again (hopefully not too late!) given where Panda is at. I’ve also had the privilege of using Bear for macOS for the first time, recently, after being an iPhone Bear user for virtually my whole adult life. (What a special, special thiing you have built, folks! I am forever in awe.)

However - in the past 18th months of using my iPhone for absolutely everything (more than ever,) I’m sad to say I had to move away from Bear as my primary text composition space largely because of this issue and returned to Drafts. Despite the fact that I’ve embedded so many screenshots of both in landscape view, I don’t actually spend any real composition time in that orientation, anymore. It’s honestly the default width of the portrait view on my 12 Pro Max (1284x2778.) 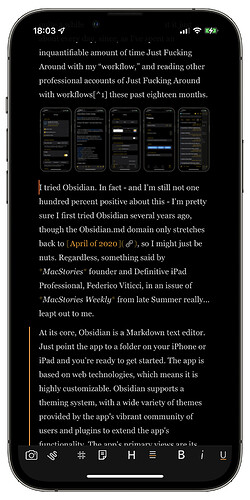 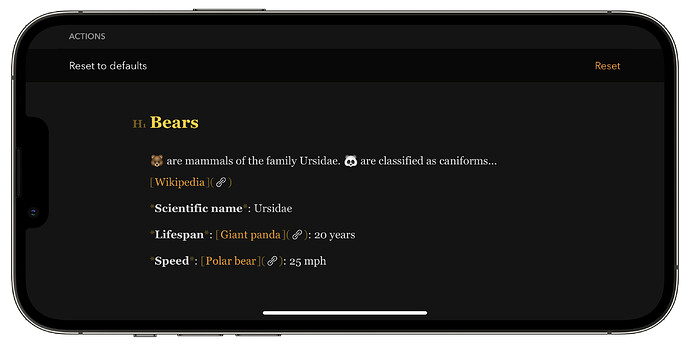 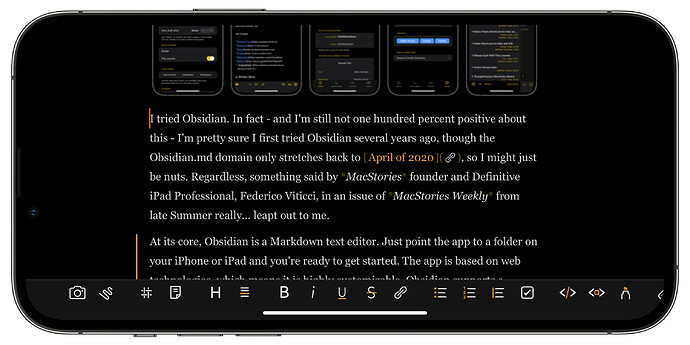 I thought it warranted speaking up again because this level of horizontal constraint is bordering on “objectively” excessive in Bear 1, which is entirely understandable given your recent focus on Panda and especially how much more well-considered spacing is there in both orientations, even just in its defaults. (I absolutely adore the word stats placement, which I just now noticed lol.) 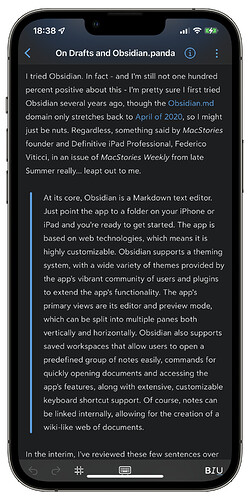 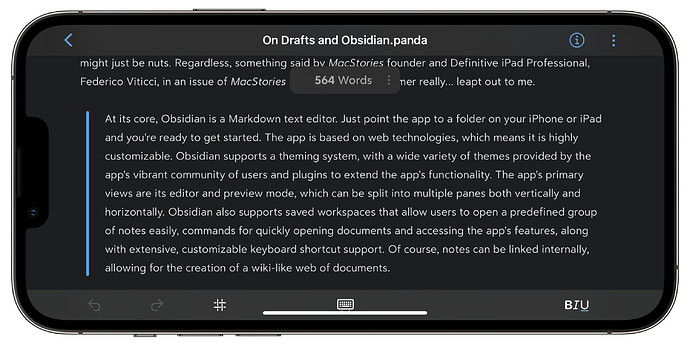 I guess I’m really just here to advocate for as much line width control for users as you can possibly Bear (lol) to give us in Bear 2.0. I know and love that Bear is not Drafts, but its default Editor Options shouldn’t be a deterrent - one would think - for potential users interested in as little configuration as possible, given the proliferation of Configuration Culture in writing apps right now, while those of us superficial enough to truly care about the way our writing experiences feel would benefit from it, greatly. 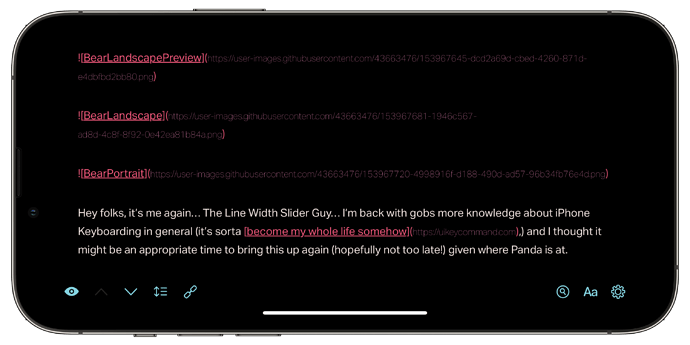 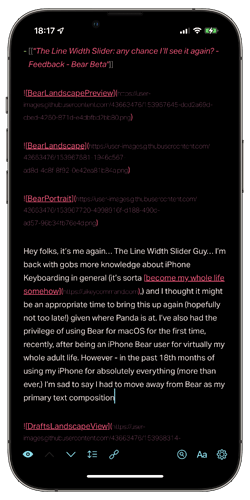 I thought I’d toss in some mockups of my current Drafts config since I took them. Below is the editor configuration I’ve stuck with for years now in Drafts, but I’m very glad I was able to whittle my way there in the first place. Perhaps something between this level of configurability and what Bear 1 has now? 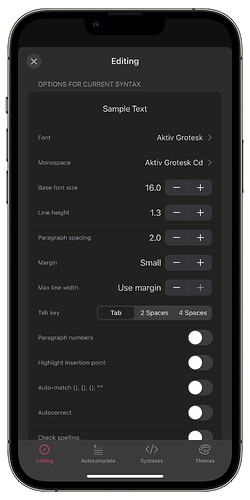